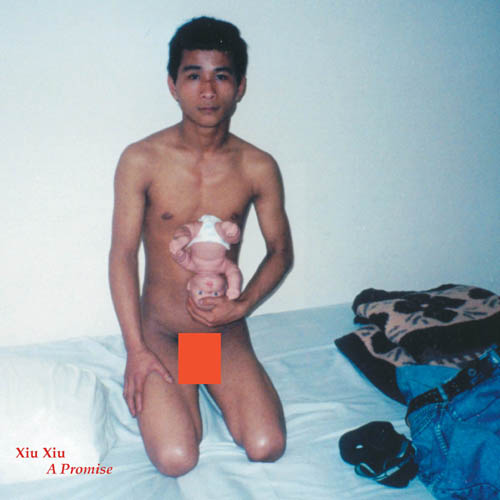 Xiu Xiu is a indie experimental outfit out of California. Despite its oriental-sounding name, none of its members have oriental-sounding names. A publicity photo of the group looks overwhelmingly Caucasian. One reviewer calls Xiu Xiu “the undisputed masters of introspective, creepy, noise-pop”. They have been around since 2000.

This 2003 album cover called “A Promise” shows a nude guy who wants to be your friend. He even brought you a present, look! Will you play?

To appreciate the full impact of how crappy this album cover is, I propose the following mental exercise. You are buying the CD, or better still, the 12″ vinyl version if it exists. The seller places it in a clear plastic bag. Now you are walking out of the store where you are seen with this album in clear view of everyone else in the shopping mall. You might even walk past a biker gang hanging out at the food court, all of whom notice your new album purchase. See the problem? The only way I would buy this album, if I really had to have my Xiu Xiu “fix”, and if this were the last Xiu Xiu album on Earth, would be to mail away to whoever is selling this, and instruct them to mail it to me in a large manila-coloured envolope or cardboard envolope, so that the general public doesn’t see the ugly cover. Also, I wouldn’t play it on my first date. 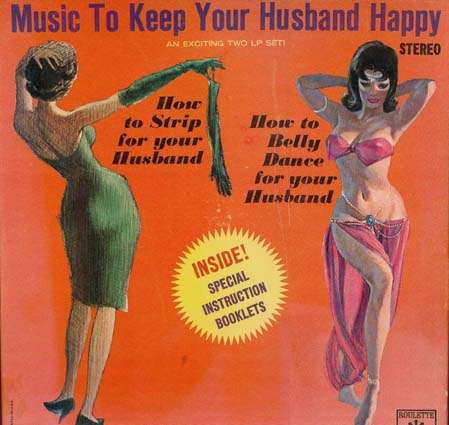 This album (Music to Keep Your Hustband Happy) is one of a couple of albums I am aware of that was set up to encourage sex play among married couples.

There are some who guide you on “what women want” and the ones here are a guide on, presumably, what men want. I wouldn’t see women buying this. Men would buy it for their wives. The covers must therefore attract the male customers. 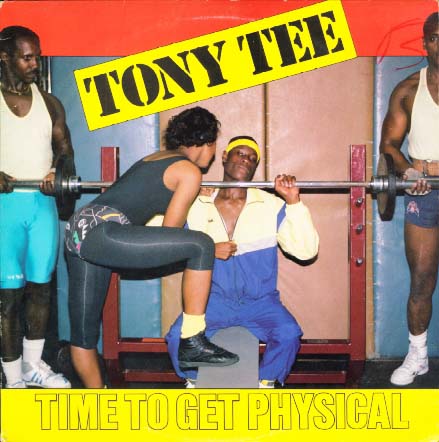 Sometimes, however, the way to a man’s heart is by tearing off his clothes. Early Hip-Hop artist Tony Tee offers us a show of his masculinity by showing himself as about to lift a barbell, which doesn’t look an ounce over 40 pounds, in his 1988 album “Time to Get Physical”.

The spandex chick on the cover, going by the body language of both involved parties doesn’t look like she’s propositioning him as much as she is threatening him. Maybe he didn’t pay his share of the rent, or maybe he is hanging out too much in the gym. She is probably accepting sex favours as payment. 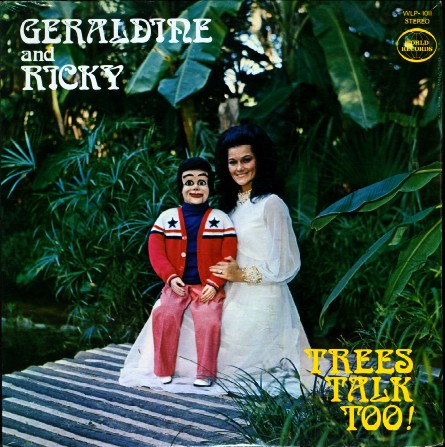 Now, there are of course some women who can’t stand real men, so she will date a fake one — one made of wood. And, she’ll live in her own world where wooden people and trees talk. This is the world that Nashville-based Geradine Ragan and her “friend” Ricky (who looks like “Planet of the Apes Meets Evel Knievel”) want you to get to know better.

I must say that the true essence of wooden puppets are greatly under-appreciated. They don’t talk back, they don’t verbally abuse you, they don’t come home drunk, and they are neither too tired nor do they ever have headaches.

The back cover of the album makes a big deal of the devout Christianity of her and her husband. Her husband, a real person named Dave Ragan, shares his life with Geraldine and Ricky, surely making efforts toward tolerance and a peaceful co-existence with this “other man”. Ricky barely tolerates the fact that Geraldine must give the occasional bit of airtime to that husband of hers, Dave. Ricky is probably heartbroken that she decided to marry this perfect stranger without even asking him if it is OK, first. And, obviously, what do the trees think of all this? 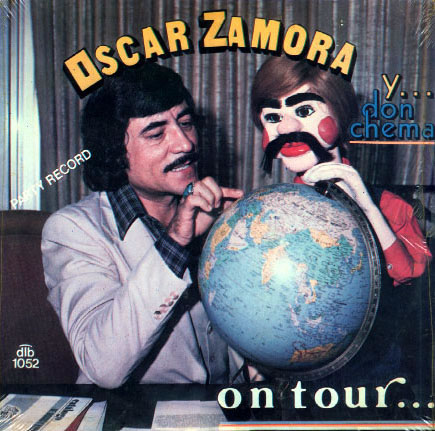 Now, with Oscar Zamora and his little wooden “friend” Don Chema, I have the ability to engage in what has so far been my good track record at giving both sexes equal time. That is mostly due to luck, and the abundance of crappy album covers. This Latino ventriloquist is based in the Southwestern US, and seems to be famous more with Latinos than with anyone else.