The Hobbit: The Cardinal Cut, A YouTube video edited by a person named Cardinal West, has boiled down the eight or so hours of The Hobbit down to about half that purely by editing the original down from the NewLine Cinema version, and posted an article about it, and offered a way to download your own MP4 copy for free, on his website. You can get all this info by entering “The Hobbit – The Cardinal Cut” into the YouTube search box.

He requests emphatically that the only people who should be downloading the edited movie are people who already purchased a copy of the trilogy, either digitally or through various video disks. For the record, I have had my blu-ray copy of the extended editions of all three parts for some years, and thus downloaded and viewed the Cardinal version of the movie in full.

Cardinal is The Hobbit without the bullshit. Gone are the distractions that add nothing to the story, such as the love triangle between Tauriel, Legolas, and the dwarf Kili. It didn’t exist in the book, and adds not one iota to the plot. The Battle of the Five Armies (the battle in The Hobbit, not the third part in the movie sequel), which took barely 5 pages in the original book, which has thus been variously nicknamed “Battle of the 5 Pages” or “Battle of the 5 Studios” (Warner, MGM, New Line Cinema, The Weinstein Company (yes, that Weinstein), and the Saul Zaentz Company) took up over 90 minutes in the third part of the trilogy. Natch, most of that was cut out as excessive in the Cardinal cut.

As for Cardinal, what remained was actually a pretty good and entertaining movie, with a story line that was much easier to follow. The parts of the film that needed gravitas were undiluted by distracting side plots that weren’t part of the original book, and it aided the overall quality of the film. I didn’t mind the occasional choppiness of the editing, since it all seemed engineered to draw my attention more to the story.

There are other “fan edits” in existence, each with their own arrangements for downloading. Chris Hartwell did one in 2020, and in the video I saw which discussed his rationale for editing down The Hobbit, he was not clear on how a fan could  obtain a copy of his edited version. Hartwell claims that he was achieving more of a balance between the storyline of the original book and its adaptation to a movie, taking advantage of the power of film to embellish and add other dimensions to what was text. Hartwell appears to be making his money through Patreon crowdfunding. Cardinal is also funded through Patreon.

Silk Road is a fairly new movie released back in February to overall lukewarm reviews.

It tries to tell the story of a fellow named Ross Ulbricht, who was the mastermind behind the darknet site Silk Road. Silk Road was a website that dealt with selling drugs, and was a story that had potential. But in the end the film was pretty boring.

The principal medium in this movie is the computer, in the sense that the subject of the story, Silk Road, was a website which exchaged illegal drugs for bitcoin, that could only be accessed with a Tor browser. So it is not an action movie by any stretch. Lots of focusing on the website, and the fact that it specialized in selling illegal drugs with bitcoin. Also, much was made of Ulbricht’s ideological musings, that he fancied himself to be the world’s saviour. This is all fine. The internet and the computer field is full of people professing to be people’s saviours, to varying degrees of legitimacy, ranging from Bill Gates, to Richard Stallman.

The medium of film does a better job focusing on people than on websites and the exchange of contraband for bitcoin. There are only so many screenshots, and so many US Post delivery trucks that you can film that would get the point across. Ulbricht seems to come across as a bit of a self-absorbed dick, but you kind of expect that from someone who thinks he can dance between the raindrops of the internet underworld without getting wet. We are never allowed to see deeper into Ulbricht than that; we don’t seem to be allowed to see much insight into his relationship with Julia Vie to feel any tension or for that matter much depth of emotion for either party after their relationship falls apart. But when she told him to leave, you got the feeling he had it coming for some time.

The entire movie seems to be similarly lacking in depth. Officer Rick Bowden, a creation of the movie writers to create a tension between old-school and new, begins to get caught up investigating the massive narcotics trafficking scheme that is Silk Road. He is portrayed as a narcotics officer out of rehab who had been reassigned to cybercrime.

While the movie was factual, Bowden was intended to be an amalgamation of two or more officers, who ended up with 6 years in jail for their dealings on Silk Road. Ulricht himself was given a life imprisonment without parole, which bears out in news accounts.

The movie made few attempts to make a case why I should care about Ulricht, the mastermind behind Silk Road – beyond Ulricht’s wide-eyed youthful naivete; few attempts to give us reason to care about officer Rick’s street smarts or to give us any sense that any of the characters had any appreciation of him by the end. That fell flat too. In fact, we are mostly only allowed to see his more buffoonish side as a cop, leaving us to think that his abilities as a Narc were no better than his abilities as an internet sleuth. Also, there was not enough depth given to the Dark Web or Tor browsers or encryption technology or Bitcoin, to give the film any “Geek cred”, so it fell flat there also. It is a wishy-washy film that appears to alienate every demographic equally.

Silk Road is never outright tasteless; and the story is not too hard to follow. You are guaranteed to never be at the edge of your seat for any reason. If you want an afternoon or evening of feeling comfortably numb with a fairly easy-to-follow story, you’ve come to the right place. If you were looking for a thrilling movie that would make you think about the complex issues of cybercrime, or that would challenge Ulbricht’s twisted libertarian beliefs that ultimately put him behind bars … this isn’t it. I would give it two stars out of five. 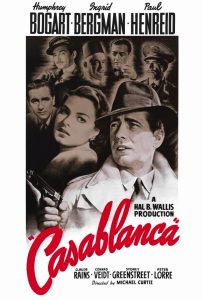 Of course, there was Bogart’s trenchocat and fedora, a look so imitated over the decades that it has become a visual cliche, which he wore during certain scenes. There are also the lines of which I was able to identify five: