This installment has one or two “news-oids” that involve themes of violence and death. These are hidden below under spoiler tags. Click if you wish to read anyway.

Some of these (actually most of these) are from Alex Jones, some of these I made up. You be the judge. I originally wrote or looked up this stuff over a decade ago for Uncyclopedia. A part of it is reprinted here under Creative Commons.

In the early nineties, Bruce Springsteen had a hit with the song “57 Channels and Nothing On”. It was the precursor to the same feeling we felt over the “500 channel universe” we experience today.

I have no cable by choice. I can afford to put it in, but apart from educational channels and the news station, I really have little to no interest in what passes for entertainment, and, frankly, no time to sit down and watch what appears to be mostly pointless programming spread out over hundreds of television stations. Here is a small list of programming explaining why I feel this way.

I believe the third time anyone writes an article on the same creepy topic, it is time either to cease and desist, or to make this into an ongoing series, embracing the concept whole.

Twice before, I have written with a straight face about how the dead participate in all parts of the electoral process, being both the voters, and those being voted on. And I have written more than once, that dead people have often won elections against their living opponents. While all this sounds both creepy and hilarious, these stories are utterly true. And before you think this is a liberal or conservative conspiracy, I also reiterate, that the dead benefit both sides of American politics. Since there are more dead people than living, we call them the real Silent Majority in this blog. We ought to root for them, since many of these are hard-working dead people who have never committed crimes, and don’t bother anyone.

Just yesterday in The Toronto Sun, the front page — yes, the front page, in the biggest screaming headlines you have ever seen in your life, decried the Liberal practice of leaving dead people on the voter rolls. So, now the silent majority have invaded the Canadian Liberal party, according to The Sun. While I understand that the Sun takes every opportunity to attack the Liberals, and have never met a politician to the right of Atilla the Hun they didn’t like, I have to say, the dead are not a voting block. I am certain that the list contains conservatives and liberals in fairly equal numbers. Regardless, no one can control the voting preferences of the Silent Majority, since you can’t speak to them, and they can’t speak to you. Even if you could speak to them, the Silent Majority will just vote as they damn well please. Or, do anything else they damn well please. You may have your perceptions and illusions about the Silent Majority, but we can both agree that you can’t tell them who to vote for. They just won’t listen, and you can’t change that.

You can call me a leading authority on the voting behavior of the Silent Majority. I have been observing them for quite a while now. And a good many years from now, I too will some day go to the Majority. To be honest, it’s pretty boring watching them, because I never see them move. I guess that’s part of their mystique.

Humans are a curious species. We like to ask the questions about why things exist/happen/not happen, and so on.

When I built my search engine questions, I began with the word “WHY”, then gradually built on that, one word at a time. Now, I pass on the list of questions to you.

If the list of Google autocomplete suggestions which is to follow is taken to be the true distillation of human thought, we seem to be very preoccupied with aches and pains, bodily functions, and weather events, and not a whole lot outside of that.

WHY DOES IT SEEM

WHY DOES IT NEVER

WHY DOES IT ALWAYS SEEM

You are a follower of witchcraft, and you want to become a wrestler for WWF or something (what decent witch wouldn’t want that?), then you need to have a moniker. An alias that captures all that you are. Here, from the website “Behind the Name“, are some name suggestions to help out witches and warlocks who want to also join the wrestling profession (a mixture of names construed to be masculine and feminine):

There is a brass band called “The Po’ Boys” which does a killer cover of Led Zep’s 1971 hit Black Dog:

And as for the Twister, here are the Talking Heads, same as they ever were…

Here is a Lous Wain’s cat, after having late onset schizophrenia: 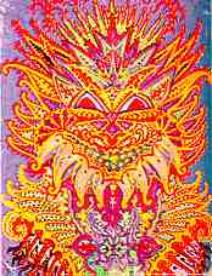 By some coincidence, both of these album releases are from Cuba, and from the year 1968.