There are a lot of notable people who have passed away this year, but I think I got sidetracked on the ones that have died just this month. Here are some of the people whose lives I have found most interesting, alphabetized by first name:

Hungarian topologist and discoverer of the toroidal polyhedron that bears his name, was given much recognition of his achievements over the years, passed away at age 93.

Founder of Canadian generic drug company Apotex Pharmaceuticals. The billionaire drug manufacturer and his wife Honey were found dead at their home. The deaths are being treated as “suspicious”, although there appeared to be no obvious evidence of a break-in. Bernard was the 12th wealthiest Canadian, worth some 3.5 billion dollars. Honey Sherman was 70, while Bernard was 75.

Played Adam Cunningham in the Canadian drama series Traders. He was in Star Trek; he was in soap operas such as The Edge of Night and All My Children. But he is most famous for playing the father of the groom Rodney Miller in My Big Fat Greek Wedding.

A Long Isand-born professor emeritus from Brandeis University who did research into motor proteins. Those are the kind of proteins that turn chemical energy into mechanical work. Examples are proteins that drive flagellum in single-celled organisms. Motor proteins also help conduct cell division in all of our cells. She was 88.

An investigative reporter who got caught writing a fake autobiography about the late Howard Hughes. While the controversy was very public and the charade quite compelling, the fake autobiography was never published. The hoax was uncovered over phonecalls from Hughes himself to the few people left who knew the voice of this reclusive billionaire. After his trial, conviction and release from prison, Irving continued to write various books to what appears to have been a forgiving audience. All of his papers, memoirs, and even journal entries while serving in prison have now been made publically available in the years since.  He was 87.

Composed theme music for The Outer Limits, and The Flying Nun. He also composed for movies such as Hang ‘Em High. However, he was in trouble legally because he had also scalped tickets for the 1980 Super Bowl on a fairly large scale and then failed to report the proceeds to the IRS. He was 86.

First Asian-American mayor of San Francisco, elected in 2011 and served until his death at age 65.

Montreal-born broadcaster, was a radio announcer in seemingly all parts of Canada, including Toronto and his native Montreal. He was 85.

Film editor involved in blockbuster films such as The French Connection, Apocalypse Now, and Scarface. He was 81.

American mathematician who studied wave motion. He enjoyed sailing, and was remmebered as being well-dressed, deeply cultured, and open-minded about science and math ideas. He was 95.

American Biochemist, known for his studies in germ warfare with the American military. Also wrote several books on Americana, un-related to biochemistry. He was 78. 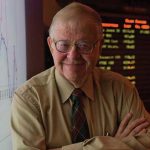 James Robert Thompson, founding chair of the stats department at Rice University in Houston. Known for his sage advice to his doctoral students, and involvement in military defence, he is survived by his wife Ewa Thompson, also an emeritus professor of Slavic Studies. James was 79.

Roos was a math professor from the University of Stockholm in Sweden, who was one of the few who seemed to make it to the status of math professor without a whole lot of formal math training beyond high school. He was 82.

News editor at the New York Times, known for her humanity and adaptability in adverse situation involving the reporters under her watch who were given assignments overseas. She succumbed to cancer at age 61.

Specialized in computer studies, and getting computers to talk and write like people, and by extension, adapting to end users. Passed away suddently at age 55.

First female mayor of Toronto, starting in 1991. There is a public park in the Davisville neighbourhood named after her. She died at age 93.

Iconic jazz singer who is best known for singing tunes such as: “That Old Black Magic”, “I Got You Under My Skin”, and “Bel Mir Bist Du Schoen”, and recording on dozens of albums over 5 decades, died at age 89.

Founding chair of the math department at the University of California at Santa Cruz whgo published his lectures on topology. He was 81.

Otherwise known as Pam the Funkstress, was prominent on the San Francisco Bay Area Hip Hop scene. She died of organ failure at age 51, following an attempted transplant.

The lead singer and songwriter of the American band The Smithereens, had succumbed to numerous health issues and injuries over recent years, and has died at age 62.

A murderer in France, whose life imprisonment was instrumental in events leading to the abolition of the death penalty in France in 1981. He died at age 64 of lung cancer.

At a Tim Horton’s, we ordered coffee, I ordered a doughnut. Denise wouldn’t have doughnuts. She seemed a little upset. I later found it was because she had visited her mother and became victim of her latest insensitive remarks.

“Why do you bother visiting your mom if all she does is hurt your feelings,” I ask. This always seems to happen, almost like a weekly routine.

“Well, she is my mother, and I am the only daughter, so I am seen as the only one who can do certain things for her once in a while. But when she says something hurtful, what I normally do is go home, think about it, write my feelings down somewhere, and then try to go about my life again.”

She went on, mostly elaborating. I was silent as she was explaining this to me. I could say that buy viagra canada us script writing is only a temporary measure. It helps you to figure things out, but it doesn’t solve your problems. It might be a way of licking your wounds, but it alone doesn’t heal them. As I saw it, the only way she could heal was to not visit her mother, and to stay away from any other source of hurt.

I don’t think she wanted to hear that. There was a sense of security she seemed to feel about the rut she was in. She was, in her mind, coping splendidly. She would be hurt by people in the world around her, she’d retreat home, lick her wounds, then do the same thing again. With all that hurting and healing, there was no room left for anything positive. Certainly no room to make a positive contribution to society in general.