Humor can be a place where we celebrate what we as a human race value: honesty, love, safety, racial equality, fairness, peacefulness. We usually do this by poking fun at the times when any of these values are violated by public figures such as world leaders or celebrities. Usually these violations happen once or twice, but what if it happens all the time … ?

It’s been an amazing month on the talk show circuit regarding how Trump and his administration have been lampooned by seemingly every stand-up comedian and talk show host — and don’t forget Saturday Night Live. It will also be interesting to note how much mileage you would get out of the political satire.

Melissa McCarthy will have to work hard to try to make the caricaturing of Sean Spicer fresh for the next four years. The same can be said for Alec Baldwin, or anyone charged with hosting a nighttime talk show, like Bill Maher or Stephen Colbert.

But I guess, it is not just Trump that is a laughingstock. It is also a large swath of his administration and his appointees. It looks comedians are already lampooning Education Secretary Betsy DeVos, Chief Strategist (and probably the real (unelected) president) Steve Bannon (who right now appears on SNL as a kind of Grim Reaper), Chief of Staff Reince Priebus, and of course Mike Pence (the Vice President), Jeff Sessions, the list goes on. The field is so ripe with those who shall be referred to as “characters”, that it could also turn out that the supply of satirical material will be nearly unlimited. It would be a surprise if somewhere there is a quiet, boring place in government where things just go on as usual, under this administration. A department inside of a department that no one has ever paid attention to and no politician cares about. Oh, the hilarious possibilities in that!

It is worth noting that I have not really been a fan of SNL for some time now, as many haven’t, but seeing that their ratings have been the best since the days of Wayne’s World, and possibly since the days of The Blues Brothers, it doesn’t look like they are going to slow down the pace any time soon, and it might be high time I start tuning in.

Jim Carrey – Probably one of the funniest comedians alive, the star of the Ace Ventura sequels, The Mask, and The Eternal Sunshine of the Spotless Mind has had a few ups and downs in his private life, including battling depression, he has sworn off all meds, booze, and even coffee, and has been that way since at least 2013.

Henry Rollins – This former lead member of the post punk group Black Flag and later becoming a maker of several spoken word records, appearing in lots of films, found drugs and alcohol to be “a bummer”, and tended to be too much of a bore, and so he has never felt the need to drink. He says he gets his highs from listening to music and performing.

Robin Williams was a great comedian, whose greatest strengths lay in ad-libbing. It is said that the writers for Mork and Mindy left intentional gaps in the script so that Robin could fill it in with his lightning-fast ad-libbing.

He played very funny characters on stage and TV, but he also played very warm, but serious characters on film. One serious character was his role as counselor Sean Maguire in the 1997 movie Good Will Hunting, a film loosely based on the life of Will Sidis, a real-life savant, rumored to have an IQ of 250 to 300, but his IQ could not have been as high as that. Indeed, the scale does not go above 200.

He was an actor with an amazing amount of energy, and he will surely be missed.

The Saturday Night Live (SNL) parody of the Toronto Crack-Smoking-Mayor-in-name-only Rob Ford has been roundly declared, from many sources in radio and blogs, and me, to be not funny. A post-mortem is in order as to why SNL, the foremost bastion of coolness-and-funny, dropped the ball bigtime on this one with last Saturday’s show opener regarding Rob Ford.

Writing comedy is hard work. Parody and satire are the worst to write about. Satire can’t not be funny. Satire that does not make you laugh quickly becomes a big turn-off. And to make things worse, in this situation, it is Rob Ford himself who has all the best lines, and he delivers them deadpan, with no sense of irony. That would be the mark of a great comic actor, but he is not acting. He is the definitive windbag, with his grandiosity billowing in full sail, and no one wants to tell him how full of it he really is. And so not being told, he keeps going full steam ahead, the gift to The Comedy Network that keeps on giving.

SNL was going for something truly ambitious when they broke ranks with other comic satirists such as Bill Maher, David Letterman, Steven Colbert, and the best of the bunch Jon Stewart by actually making a skit of this.

A skit. Like, you know, with actors and saying lines, and stuff.

And who would play Rob Ford? And would they do justice to him and the whole situation? It’s hard. Try it, sometime. That would mean that your punchlines have to compete with Ford’s. And SNL, populated with the best comic writers in America, couldn’t match him. All they could muster were a few sentences ending in “eh?”, a drunken “best mayor” song and dance followed by a “crowd-surf” dive gone badly and couple of penis jokes. This kind of weak offering is the kind of writing a comic writer resorts to under a 3-day deadline with blank paper and 6 hours left. The story changes from underneath you, Ford steals your goddamn lines by saying something better in the interim, the wastebasket getting fuller and fuller with ideas that no longer work, and telling excuses to your boss at NBC won’t pay the bills. That had to be the scenario that produced the skit.

Jon Stewart, and just about everyone else, however, took the easy route, and in actuality the only sensible route. They played back recordings of Ford himself speaking the punchlines, with the real comedians playing “straight man” and reacting to him. That is really the only sensible way out. Rob Ford has to be understood as “the comedy which writes itself”. Literally, and there is really no choice. If you come up with something funny, Ford will blindside you with something more brilliant. Then, you’re not funny anymore. Your only hope is to know your place and play second fiddle to him, and just react.

Another in a series of highly-circulated videos. Somewhere off the coast of Ireland in the North Atlantic, a large, fully-armed ship tries to avoid a collision with something on its radar which it thinks is another ship. They make radio contact, and find this smart-alecky Irish dude on the other end. American bravado versus Irish snarkiness. Who wins? This is an ad for the Swedish company Silva Navigation Systems.

Recently, Kanye West has taken to Twitter, and many of his quotable tweets have been repackaged by someone with a lot of time on their hands, and have become the new captions on many New Yorker cartoons. Not my cup of tea (I didn’t find them either funny or ironic, just dull), but here is an example. Clicking on the graphic will get you to the source of many more of these re-worked comic frames. 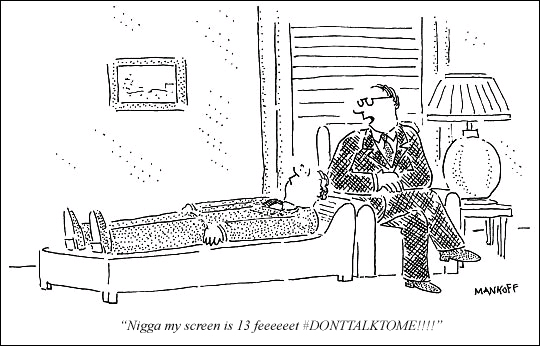 There is a brass band called “The Po’ Boys” which does a killer cover of Led Zep’s 1971 hit Black Dog:

And as for the Twister, here are the Talking Heads, same as they ever were…

Here is a Lous Wain’s cat, after having late onset schizophrenia:

Here is a list of spam subject lines in recent emails. And remember: “The assurance receives the shoes” (wtf?)

By some coincidence, both of these album releases are from Cuba, and from the year 1968.