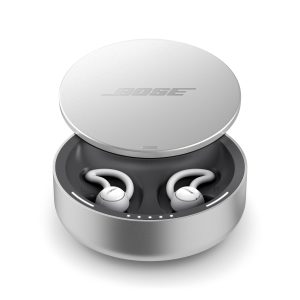 Bose Sleepbuds have helped me sleep this past week, so they appear to live up to the claim of using white noise and nature sounds to mask outside noises. The question is, was it really worth the $325 price tag?

Other reviewers have complained about the earbuds not fitting properly, despite the three sizes of earbud attachments that come with the device. Others have complained about the discomfort of trying to sleep with earbuds stuck in your ears all night. To the first charge (the price that is), it really comes down to how badly you want to have a good night’s sleep, and if it works for you, then it works.

To the discomfort issue, I must say that we all have different sized heads and ear canals. My buds weren’t exactly perfect, but they also weren’t totally uncomfortable. And it did make a difference in how I slept. The sleepbuds end your sleep with a pleasant sounding alarm, which woke me up feeling alert and relaxed.

I found that getting a full charge is not straightforward, unless you remove the buds from the earpieces each morning. If you try to connect the earbuds with their rubber earpieces still on, as depicted here in the ad (see left), it is not always guaranteed you will get good contact, and hence a full charge by the next evening. There were some mornings I woke up with the batteries nearly dead and the alarm didn’t go off.

Also, if you were expecting to go to sleep with your favourite music, then these buds are not for you. These buds only play the white noises/nature sounds programmed into them. They are essentially loops of shorter sounds set to repeat all night. The loops of leaves rustling or rain falling were more obvious, and were more annoying after I noticed it. The best sounds were the fairly uniform sounds, such as the airplane cabin, river sounds, warm static, waterfall, or ocean sounds.

The earbuds are not big enough to fit Bose’s noise-cancelling technology. Thus, they do not detect or cancel surrounding noise, if you were expecting it to. All they do is produce is a sound, which is designed to mask other sounds. The rubberized coverings over the earbuds are made to fit snugly into your ear canal, and act as another sound barrier as well as not falling out at night (they never did in my case, unless I chose to sleep on my side — I mostly sleep on my back).

I also found that the re-charging is often unreliable, and you have to be absolutely sure the contacts are engaged between the earbuds and the charger. I found that you need to check the screen that tells you the battery levels. It is charging both earbuds if both earbuds are not detected. This often takes a couple of extra minutes out of your morning. Before knowing this, I had taken my earbuds out of the charger at night, to find out that one of the earbuds could be as low as 1% charged.

Last night was the first time in a week without sleep buds, and I have to say I tossed and turned and woke up into the night, so the quality of my sleep did suffer without them. For me, the sleep buds was worth the money, despite its limitations.

I also want to say that fake Bose sites are out there. A couple of days ago, boseaen.com came up in a search engine with a high ranking, as a clearance house for Bose products. I saw sleep buds there for $69. Too good to be true, since these sleep buds have only been selling for the past couple of months. I even saw their uber-expensive aviation headset for $79. I know you can’t get those for under $1400 in Canada. I checked the WHOIS database on my shell account, and found that boseaen.com, while looking mighty convincing, is based in China. I called a local Bose retailer in the Toronto area, and he tells me they are a fraud. Nice to know, before you give them your credit card information, as well as other private information. If you find you have been scammed for any reason, and your credit card is involved, notify your credit card company as soon as possible, to have your card cancelled and issue a new one.

For the record, I purchased my sleepbuds from a real person at a real Bose store, located at Toronto Premium Outlets, an outdoor mall located in Halton Hills, north of Oakville on Regional Highway 3 (Trafalgar Road) and Steeles.