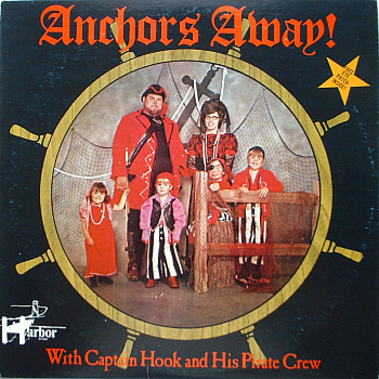 I was going to name this blog entry “family style”, but then I remembered that was the name of a 1990 duet album by brothers Jimmy and Stevie Ray Vaughan. It would have been an insult to SRV’s memory, I thought. So, I changed it to a straight title.

Now they say that the way to raise a family is to run a tight ship. Now if you can have your family live on a real ship on the high seas and in shark-infested waters, then you have it made. You can rule the roost and threaten to make the kids walk the plank if they misbehave.

According to my reliable secret sources, this “vanity press” album hearkens back to around 1974, and Captain Hook, whose name does not appear to be revealed as otherwise, really does have a hook for a left hand. He lost a leg and an arm in a motorcycle accident and was “born again” while in hospital. Hook became a tele-evangelist in Indiana for over 20 years after he “became Christian”. He also performs ventriloquism as part of his act. 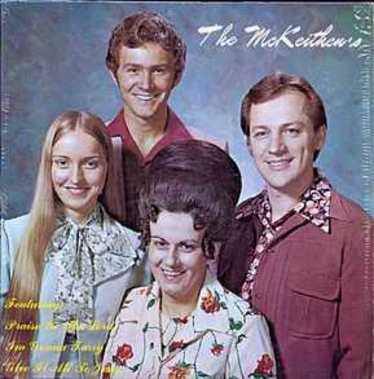 I was going to place The McKeithens in the Bad Hair entry, but it was only the hair of one person, the mother in the foreground, that I was concerned about.

The McKeithens’ self-titled LP, likely from 1976, likely marks the start of a ministry of singing and fellowship that began in 1976, and lasted until 1991. I can’t say for sure where they hail from. There is a Myspace blog about them, but it is unlikely that the family had anything to do with the blog. I mean, would a family like this make virtual friends with people with usernames such as “Lady Stinky Puss”, “Chris Crocker”, or “Phat Gurl”? Don’t think so. Clearly, the blog is set up to make fun of this record cover. However, there is almost no original content in the blog, and it appears to have been abandoned.

This would have been a plain album that would have been ignored, but for the Winebago-sized hairdo the mother has.  I think it’s a wig. A wig that large could serve a purpose, you know. You could use it to store food, prescription medication, house and car keys, a change of clothes, photo ID, passports, train tickets, the King James Bible, sheet music … all the things you need to go on an evangelical singing tour. 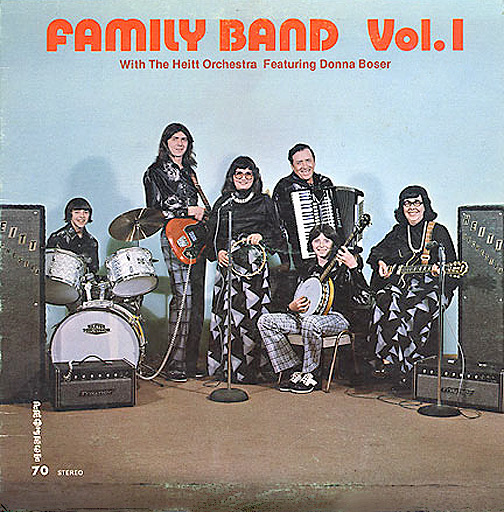 The Heitt family are a study in obscure, small Saskatchewan villages that are little known even inside Saskatchewan. If you blink as you drive past these places, you might not see them, so be careful.

Most of the family belonging to the Heitt Orchestra are natives of Revenue, Saskatchewan, consisting of not much more than two crossing roads, about 200 km west of Saskatoon, as the crow flies (more like 230 km by highway, going by Google Earth). If you look for it on Google Maps, Revenue is where the low resolution area begins.

The only non-family member is vocalist is Donna Boser (holding the tambourine), who lives one hour’s drive deeper into Google’s low-resolution area, and closer to the Alberta border, in Fells, Saskatchewan. Although if you ask Donna, she’ll probably tell you she comes from Reward, Saskatchewan, which is a larger community close by. The “Where the Hell is Fells, Saskatchewan?” T-shirts must be selling like hot cakes over there. Boser still sings in the same part of the province.

Donna now lives in nearby Unity. At least they paved the main highways over there. Unity is still a small town where someone spent an idle afternoon counting the houses, and Unity has 960 of them (population is about 2500). And the deal is that Fells and Revenue are much smaller than Unity. Unity boasts its own website. And here is a virtual tour of Unity, where you can see how flat it is (should take about a minute).