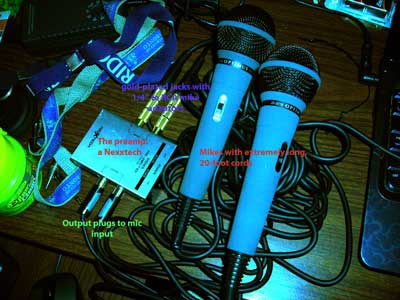 This photo shows my sound equipment used for generating voice recording on a laptop.

The most prominent devices on the photo are the pair of Optimus microphones which have no hint of XLR connectivity, and just have quarter inch jacks. I bought them 10 years ago, and they have hardly been used.

I thought it was time to pull the old mikes off the shelf and use them for once. But in my ongoing struggle to be cheaper than is socially acceptable, I scrounged around the music and sound shops for equipment that would utilize these mikes. I was constantly confronted by salesmen who, in the efforts to socialise me into the range of acceptability for spending  money, tried to sell me another pair of mikes that would work with the preamps and mixers they had.

Well, admittedly, $150 for a mixer and preamp is cheap compared to what used to be the case years ago. In fact, I have written before about a Behringer mixer that sells for under $50.00. And I’ve seen them and realise now that they don’t work with my relatively antiquated equipment. But because I am more of a cheapskate than is socially acceptable, I see that as their problem, not my problem. The XLR mikes in most of these places would set me back another $30 or so, not counting other needed equipment should I go that route.

The recording below is from my cheap setup, with audacity as the recording software. The sound is compromised as I am sitting right next to the air conditioner (the window is next to my desk), which is turned on. We are in the middle of a heat wave, and things are getting desparate, heat-wise.

(The audio appears to have been deleted.)