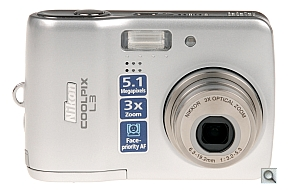 I have a Nikon Coolpix L3 that I have had for a number of years. In its day, it sold for close to 200 bucks and had a 5-megapixel resolution. These days, that level of resolution would only be acceptable for a cell phone, but I have learned to be rather happy with my purchase anyway. The color and detail are both great, and while the camera enjoys occasional but steady use, I use it seldom enough that I would forget some of its features.

I discovered this when taking photos of white paper with black print on them, under lighting I would have imagined to be more than adequate (two 300 W incandescent bulbs shining not more than 1 metre from the paper, and shining directly on the paper). What I kept getting was brownish-yellow digital photographs of these paper when they were displayed under GIMP. If I took several photographs, it took time to correct the white balance, and to remove any other extraneous color. After all, the color of the paper is supposed to be white. For about 30 or so photographs, it took over an hour to correct them all. I was even thinking to myself that I would have to get a camera that would be smarter about the lighting conditions.

And as I was pricing them out, I found that cameras half the price of my camera had over 12 megapixel resolution, and can focus optically to at least 4x (mine does 3x). In my frugal mind, that still meant an expenditure had to be made, and I needed to look more closely at some of these cameras. One helpful salesman told me that I needed a way for the camera to do the white balance internally, so I can eliminate the need for using GIMP, or Photoshop, or most other post-processing software. He showed me some cameras that can do this, and can update the image as you are adjusting it.

I left, still not making a purchase, because my instincts were telling me to check my own camera. Indeed, my old clunker L3 does indeed do white balance adjustment, and that takes care of most of the problems I had been having. I found that I could not directly control the ISO settings, which internally control light levels internally, so after correcting for white balance, my photos still came out looking dark, especially considering the strong lighting conditions I was using. I read that the L3 controls the ISO settings internally, and it is likely that it is over-compensating for the strong light, still resulting in my having to do some post-processing under GIMP. For the moment, it will be a bug in the camera’s design that I’m willing to live with for the time being. Maybe what is being indicated here is that I need not take any pains with anything other than ambient lighting (seeing that daylight pictures come out so well). 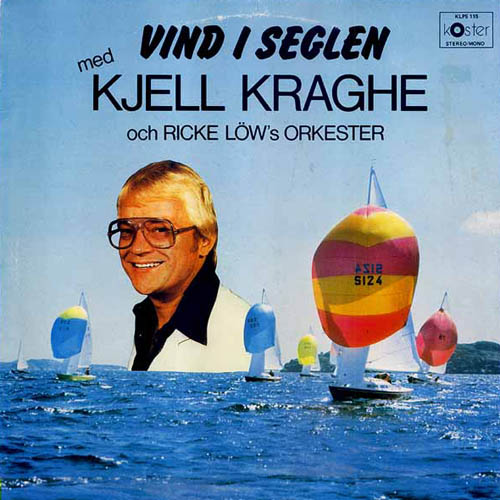 Kjell Kraghe is a Swedish performer, and not much info exists on him in English. It seems that he had appeared in a Swedish TV miniseries, but again information is sketchy.

At any rate, one has to admit that this cover could have used better planning. Or, are we supposed to think: on a bright day, with boats in full sail, Kjell rises out of the horizon, smiling at us …? I would still be thinking: but isn’t he getting wet? Whatever his dilemma, he doesn’t seem to mind.

And what about the boats? Kjell’s presence seems to be creating a wind effect that causes the sailboats to sail away from him. Kind of like a scarecrow for sailboats. 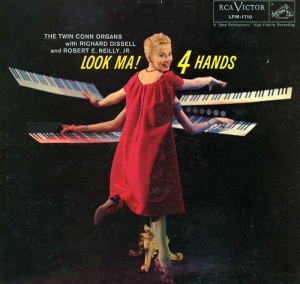 I am a relative newbie to classical music. There are 2 organists on the album “Look Ma! 4 Hands”, Richard Dissell and Robert Reilly, Jr. That’s 4 hands, and from what I understand to be the wont of some album designers for classical music, there is from time to time an accompanying picture that makes it look absurd, such as this retouched photo of a woman with 4 hands extending from her gown.

I suppose there is humor there, but I would think that it would be a bit frightening to young children below age 5. This photo came from the Tacky Raccoons blog, where they seem to have a lot of unique crappy album covers.