Thanks to some folks like Bunk Strutts, I have access to some more awful album covers to comment on. Thing is, I will have to make my postings infrequent. Say about once per week. All of my crappy album posts are still listed under the tag “Crappy Album Covers” so you can have a megadose of crappy album commentary and analysis.

First, I will do a couple of albums from my own downloaded collection from all over the ‘net. 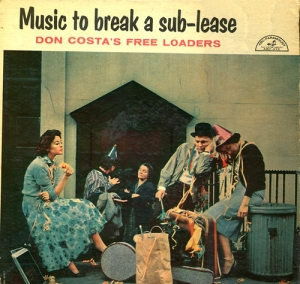 Don Costa (1925-1983) did Jazz and pop, playing lead guitar. He produced records for Little Anthony and the Imperials and Frank Sinatra.

Let’s see… If I wanted to break a sublease, and if I didn’t like my landlord, what would I do? Hmmm… Would I possibly invite 500 of my best friends and play my music as loudly and as obnoxiously as I possibly could? I think then that my landlord would show up just as that lady in the rear of the photo is doing, be properly disgusted with us, and kick us out. Maybe even bring a cop along in the process to get us rapped for disturbing the peace.

The album consists of songs that would have made an older generation sing, out of tune, at the top of their lungs (By the Light of the Silvery Moon is an example). In this album they reportedly provide perfect models of such behaviour. 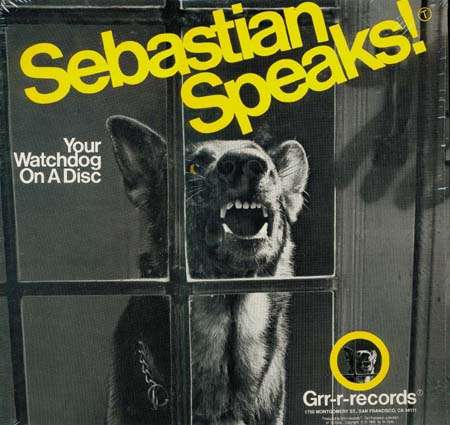 Perhaps the landlord could have fought back and played this album of a dog barking at top volume and that may have scared at least some of them.

Grr-r-records is your label of top quality barking, yelping and growling that you won’t be able to find anywhere else.

Just be careful and don’t play it at 45 or 78 RPM. You’ll get a chihuaua instead, and it won’t sound nearly so intimidating.

I get the feeling that the best this record can do is tell the burglar where you have the home theatre placed.

But you know, if you have one of those really old turntables, you could play it at 16 RPM and you can get a deep-throated grizzly bear or lion sound. Now, we’re talking scary.