I have had a problem with dust, hair, and dirt accumulating on my keyboard, going in between and under keys thus and over time the keyboard gets increasingly difficult to use, even with compressed air. Elephant adds a silicone covering over the actual keyboard. The form-fitting layer is completely removable. Cleaning it is a simple matter of wiping. No more compressed air. The keyboard sold for under $20.00, so I picked one up. 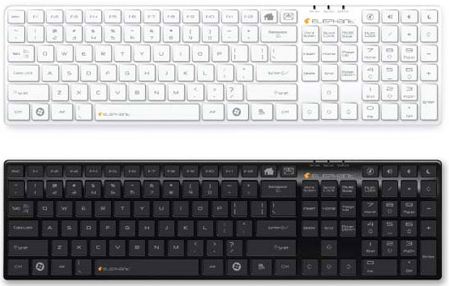 It is also kind of slim, and is avoiding the recent trend toward a split keyboard design (not sure I liked it anyway). But in wanting this cleanabillity, I had to give up the direct access keys which my old keyboard had: for things like a calculator, a file window, and email. What I get instead are the 12 function keys which seem to have a dual function within applications. I can still control the sound card volume from this keyboard, however.

I had some past experience with other keyboards which boasted total flexibilty, whose structural material consisted entirely of silicone and thus could be rolled up, apart from its improved cleanability. The problem was that I found them more difficult to use. There is something to be said in favour of a keyboard that has a hard plastic case. It makes keyboarding easier when it is done on a hard surface. And with the silicone covering I get the best of both worlds.