Hello, ladies and Gentlemen, and welcome to Strider’s Country Hayride! We only have one instrument for this concert, the Moog synth, played by Gil Trythall. 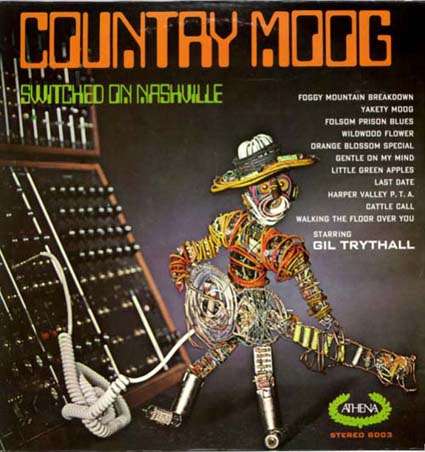 So far, the 1970 album cover meets the requirements of crappy for the purposes of this series. But today I will demonstrate that this album is crap, through and through.

I pity this generation. They don’t know what “Muzak” is. These days, when you walk into a store like Wal-Mart or Shopper’s Drug Mart, they’re playing sentimental 70s and 80s music, usually all hit songs, piped in — usually over the Internet or a satellite connection — from a central location — maybe head office. It’s still cheesy, but Muzak is entirely in another league of cheesiness. This generation has utterly no concept of the term. This generation needs to spend an hour in a store being forced to decide on a purchase to a musical accompaniment of Muzak, to know what the older generations have had to put up with.

So, the topic of today’s Country Hayride is “What is Muzak?”

Glad you asked. Muzak is also known as “Elevator Music” or if you are a Brit, it is “Lift Music”. Muzak LLC is a company based in South Carolina that registers the Muzak trademark. Muzak is still played over the telephone by some companies while you are put on hold. It is music that is calculated to be deliberately bland and played at low volume, so that you can focus on your tasks at hand and so that it is not intrusive.

Problem is, the moment you think about the music, it annoys the HELL out of you!

It is often mistaken for easy listening, smooth jazz, or MOR, but Gil Trythall will show you that there is no comparison. None.

For the first example, Floyd Cramer made a very mellow tune called “Last Date”. Some may say that it was so mellow it was Muzak. But our hero Gil Trythall sets us straight:

For the second example, Gil Trythall tries his hand at the Glen Campbell classic “Gentle On My Mind”:

Now it seems that whatever Gil attempts, it all ends up sounding like the same anaesthetic music, all the time. And of course, that is the point of Muzak. Well, this ought to wake you up:

“Attention K-Mart Shoppers!” indeed. And for the record, AMG reports that there was since another release of country moog by Trythall called “Nashville Gold”, with the year being unspecified. Also, This present LP (“Country Moog”) has since been released on CD, in 2003 on the Vivid Sound label.