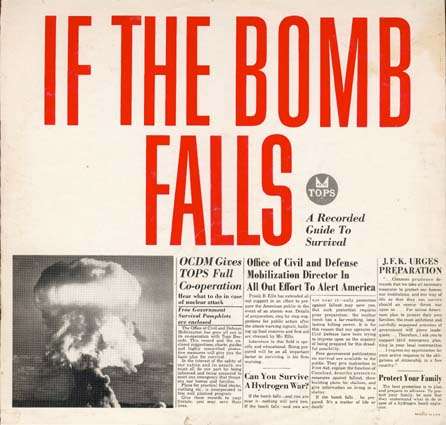 “If The Bomb Falls” was a 1961 album put out by the TOPS recording label. The TOPS label was owned by Precision Radiation Instruments (PRI) of Los Angeles. The same label recorded Mel Torme, Lena Horne, and the Ink Spots. This single album sold more than any of them did, and broke all sales records for the company, especially after the Russians announced it was testing the A-bomb.

And you can see here that the album design was precisely for the paranoid at heart. There is the title in the biggest lettering you have seen in your life; there is the mushroom cloud; there are various newspaper-style articles reminding us of how urgent this crisis is, and how fearful we should all be. 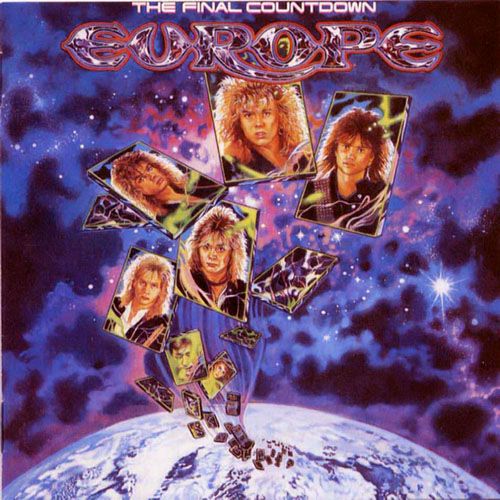 I wouldn’t feel the way I do about the album cover of Europe’s “The Final Countdown” (1985) if I didn’t think the title track sucked so much. This is the second major rock act to be named after a continent. The first one was Asia, formed in 1982, three years before Europe did (thanks to a contributor for setting me right on the dates).

The title track was a major hit for Europe, but it was one of those songs that was interesting so long as you didn’t think about the words. Heck, it isn’t even about doomsday. If these are the lyrics, then I can’t even be sure if it’s about anything.

This, then, is an album cover about nothing. Taken in context with the music, they could have chosen a wallflower pattern as well (that’s OK, I’ll bargain for this one instead). 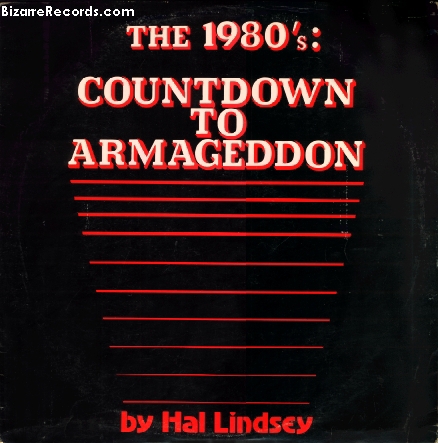 Oh, but yes: there really was a doomsday album in the 1980s — it was Hal Lindsay’s “Countdown to Armageddon”! Who can forget good ole Hal? Hal predicted the world would end in the 1970s, and made a killing (pardon the pun) selling his book “The Late Great Planet Earth”. Then, in the 80s and still realising that the world was still intact, he remembered P. T. Barnum’s maxim that there’s a sucker born every minute, then wrote the book that accompanied this record in the 1980s. And you know what? P. T. Barnum was absolutely right in his predictions!

After the fall of the Berlin Wall and the collapse of the USSR, armageddon became a tough sell. The new ruse is now terrorism, and of our living in fear of lunatics taking over the world who weild very sharp office stationery to get planes to slam into buildings. And they spend their time in caves, too.