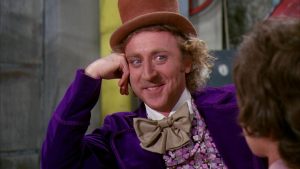 The much-memed image of Gene Wilder in his role as Willy Wonka in the 1971 film.

Today, it was reported that actor and meme victim Gene Wilder died of complications from Alzheimer’s disease at age 83.

I’ve looked up some things about the meme from “Willy Wonka and the Chocolate Factory”. Turns out that the image is from a scene where he reveals a little bit of his chocolate manufactouring process to some enthusiastic children. A few years ago, social media made a meme of this image, attaching condescending statements on all possible topics, in what became known as the “Creepy no fax payday loan buy tramadol Wonka” or “Condescending Wonka” meme. A “Condescending Wonka” twitter account garnered half a million followers, even though the account had little else going for it but its name.

Don’t forget however, that Wilder had appeared in some of the biggest comedy movies in the 1970s, many produced by Mel Brooks, such as Blazing Saddles, and Young Frankenstein; and he also appeared in the Woody Allen comedy Everything You Always Wanted to Know About Sex, but Were Afriad to Ask.

Mel Brooks, Jim Carrey, Ricky Gervais, and Russell Crowe, among others, each sent their regards within minutes of the sad news, via Twitter.