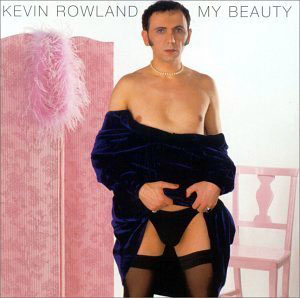 Kevin Rowland is actually a very good musician. His first solo album put out in 1988, “The Wanderer” is seen as a great, and highly accessible album from this former front man for Dexys Midnight Runners.

This album, released 11 years later, was panned by critics and was a general let-down. For one thing, the album contains all cover versons.

To be fair, this album was released after a bankruptcy and a long battle with drug addiction. He is probably still having “issues” when this photo was taken. He doesn’t look good in drag.

It is my understanding that Rowland has not relased a recording of a solo effort since. 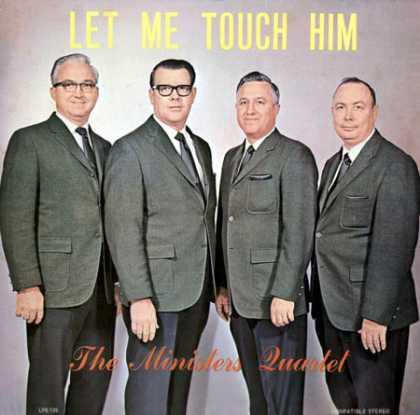 I am as open-minded as anyone. I don’t mind depictions of homosexual romance. Like all pictures that exist, there are good depictions and bad depictions.

And, oh yeah, I forgot. The unintended depictions. Here are The Ministers Quartet, and their album “Let Me Touch Him”. It all started when Ron touched Larry. Then Doug touched Jerry. Then the photograher grew impatient and told them to behave. They all then all tried to pose innocently like nothing happened. This photo resulted.

The Minister’s Quartet hail from Indiana, and their faith has a fundamentalist bent. They still exist, with a few obvious personnel changes.

Click here if you want to sample their sound. Damn good harmony. 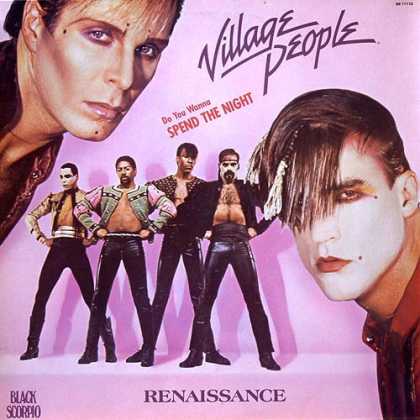 As if The Village People couldn’t ramp up the homo kitsch factor any more than they already have, here are those natives of Greenwich Village once again with a new look, way more makeup, and more exposed chest hair, with their album Renaissance. This 1981 album (the pink one) was a bad concept both with the cover art and the music inside it.

This (blue) album cover was a redesign of a 1998 Polygram CD re-release. I like this one better. Way more relaxed. It was the version of the cover that allmusic.com chose to display.

Unfortunately, it is still the same second-rate music inside. Much of their misrfortunes began with their involvement in the film “Can’t Stop The Music”, which not only bombed, it is the winner of two 1981 “Razzie” awards for Worst Picture and Worst Screenplay. They were nominated by the Razzies in 5 other categories. In addition, they were nominated as one of 5 movies classified as the worst musical in the past 25 years (along with Xanadu and Spice World). That was won by the box office bomber “From Justin to Kelly”. 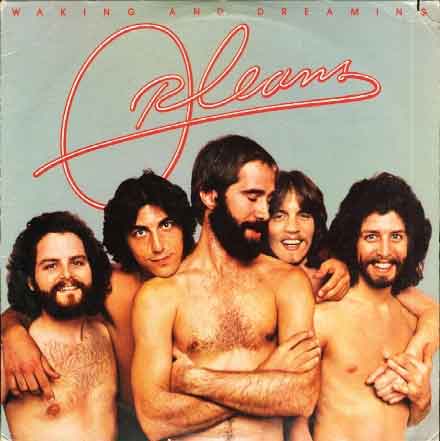 Knowing a good cashing-in opportunity when they see it, the members of Orleans decide they are going to out-gay the Village People (when they were still viable) with this 1976 offering, “Waking and Dreaming”, by taking off all their clothes. The photographer, the same one that photographed The Minsters’ Quartet (see above), told them to cover their weenies. They started to cover each other’s weenies (and one of them asked “What’s a weenie?”), so he just said “never mind” and as the guy in the middle was explaining what a weenie was, the photographer took a  shot above the waist. That left the top half of the photo empty, so that the designers filled it with a large “Orleans” logo.

The saving grace of this album, this time, is inside the covers (uhh.., the album covers). It contains one of the biggest hits of their career, and one of my personal favourites, “Still The One”, and is recognised as a fairly strong album generally, establishing Orleans as soft rock musicians of the first order.

One thought on “Crappy Album Covers #32 — Gays and Lesbians”